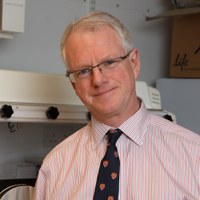 Prof Maxwell graduated from Oxford and London Universities, and did his PhD at Oxford. He worked at Imperial College until 2008 when he was appointed Professor and Divisional Director in Medicine at University College London (UCL). He was Dean of the Faculty of Medical Sciences at UCL 2011-2. He is a Fellow of the Royal College of Physicians, a member of the Association of Physicians (President 2014) and of the Association of Clinical Professors of Medicine, and of the Renal Association. He is a Fellow of the Academy of Medical Sciences (Registrar 2006-12), and of Trinity College Cambridge. He is also an Honorary Fellow of Corpus Christi College, Oxford and of the Faculty of Medicine at Imperial College London.

Prof Maxwell’s main research focus is on cellular responses to oxygen. Key aspects have been revealing hydroxylation as a novel method of controlling protein destruction and identification of a cellular “oxygen sensor”. His current programme is focused on the link between Von Hipell Lindau loss and kidney cancer, and the therapeutic potential of potentiating Hypoxia Inducible Factor activation by inhibiting the hydroxylase enzymes. He also has a programme in identifying genetic causes of kidney disease.  He has been an author of 216 publications (>30,000 citations, h-index 72 (see researcherID.com C-5557-2008).

Prof Maxwell has undertaken consultancy work for Mission Therapeutics, ReOx, Bayer, Bristol-Myers Squibb, Oxford Biomedical, Bioenvision, Powderject, Roche and Otsuka Pharmaceutical Europe. His directorships include Scottish Mortgage Investment Trust (FTSE100 company), Director of ReOx plc (University of Oxford spinout where he is the scientific founder), Global Medical Excellence Cluster, Cambridge University Hospitals NHS Foundation Trust, and Cambridge University Health Partners. He is a trustee of the Public Health Genetics Foundation. He chairs the Grants Advisory Board of the British Skin Foundation (Chair), and the Scientific Advisory Board of Rosetrees Trust. He is a member of the Scientific Advisory Board, National Cancer Centre, Singapore, the Medical Advisory Board of the Gairdner Foundation, the Medical Advisory Committee of The Evelyn Trust, and of the Midlands and East Learning and Education Training Board (LETB), the Publications Committee of Genomics England, the MedCity Management Board, the Faculty of the Eureka Institute for Translational Medicine, and the Cambridge Enterprise Investment Committee.

In Cambridge he heads the internationally renowned School of Clinical Medicine, which has grown substantially under his leadership, approximately doubling in size. Currently the School has 2,700 staff with a research grant and contract income forecast of £186.5m for 2017/2018. He is responsible for strategic and operational leadership of all aspects of the School, and is also extensively involved in governance of the University as well as operating as interface with NHS partner Trusts, the Academic Health Science Centre, and Cambridge University Health Partners. Nonetheless he manages to continue to run a small research group in the Cambridge Institute for Medical Research, which is funded by a Wellcome Trust Senior Investigator Award.