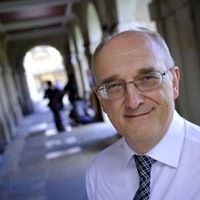 Prof Sir Leszek Borysiewicz was born in Cardiff in 1951, the son of Polish parents whose story was as remarkable as his own. Jan Borysiewicz and Zofia Helena Woloszyn were captured in Eastern Poland at the outbreak of World War II and spent two years in Siberia. When Hitler invaded the Soviet Union in 1941, they trekked across Central Asia to Egypt, where they joined the British 8th Army in its operations up to and including the invasion of Italy. In 1947, they chose to settle in the United Kingdom rather than return to their native Poland.

Prof Borysiewicz grew up on an estate in Cardiff in a small, Polish-speaking community. He did not speak English until he was five years old (he also speaks some Welsh). An able student, he passed his 11-plus examination to gain a place at Cardiff High School, where he enjoyed biology and chemistry as well as extra-curricular activities including chess, rugby, cricket and music.

He gained a place at the Welsh National School of Medicine (now part of the Cardiff University School of Medicine) where he developed an interest in experimentation and the crossover between different academic disciplines. In 1977, he moved to London as a postdoctoral researcher, taking up an MRC Clinical Training Fellowship at the Royal Postgraduate Medical School. There, he witnessed a number of attempted kidney transplants in which the kidney survived but patients suffered the effects of cytomegalovirus as a result. This stimulated a lifelong research interest in immunology and how and why latent viruses that normally remain quiescent in humans can suddenly morph into pathogens. Broadly, his research specialisms also include infectious diseases, cell mediated immunity and vaccine development.

He continued at the Royal Postgraduate Medical School, latterly as a senior lecturer, before taking up a six-month post in the Gambia, where his work in state hospitals further whetted his appetite to study global health issues. In 1987, he moved to his first post in Cambridge, as Wellcome Trust senior lecturer in infectious diseases at Addenbrooke’s Hospital. A lectureship in medicine at the University of Cambridge followed and he also became a member of Wolfson College, where he now has an Honorary Fellowship.

In 1991 he returned to his home city of Cardiff when he was appointed head of the Department of Medicine at the University of Wales, where he led a research team that carried out the pioneering work on vaccines for which he gained his knighthood in 2001. In particular, his unit in Cardiff conducted clinical trials for a therapeutic vaccine for human papillomavirus (a cause of cervical cancer) – the first in Europe.

A post at the Faculty of Medicine, Imperial College, London, followed and in 2004 Professor Borysiewicz became the College’s Deputy Rector, responsible for the overall academic and scientific direction of the College. Furthering his passion for interdisciplinary research, he oversaw new interfaces between engineering, the physical sciences and biomedicine which resulted in fresh research programmes and the construction of the Burlington Danes Building, Europe’s biggest clinical imaging facility. He was also an enthusiastic supporter of the “Generating Genius” initiative, which aimed at raising awareness of opportunities among underprivileged but gifted schoolchildren in London.

Prof Borysiewicz was popular as Deputy Rector and postgraduate students at Imperial presented him with an award to show their appreciation. In 2007, however, he was appointed as Chief Executive of the Medical Research Council. In this role he frequently contributed to public debates on some of the most contentious areas of medical science, such as health records, stem cell research, embryo transfer experiments and cloning. He also stressed the need to ensure that research discoveries in medical science are translated into treatments, while at the same time never losing sight of the equal importance of fundamental research. He was responsible for driving forward the ongoing development of the UK Centre for Medical Research and Innovation, which will become Europe’s biggest biomedical institute. During his time with the MRC he was elected as Vice President of the Heads of European Research Councils and Chair of the Heads of International Biomedical Research organisations.

He retains a stated passion for global health, interdisciplinary research and communicating his own enthusiasm for science and scholarship as a whole to the public, in particular the young. He is a member of more than 70 professional and distinguished organisations. Among his many honours he holds the Royal Society of Medicine’s Jephcott Medal and the Royal College of Physicians’ Moxon Trust Medal and is a Fellow of the Royal Society. He is also the author of reports for the World Health Organisation, the MRC and the Department of Health and was chair of the research advisory group that reviewed and co-ordinated the human health research strategy on Creutzfeld-Jakob Disease.

Prof Borysiewicz met his wife, Gwenllian, at medical school and they have been married since 1976. They have two adult daughters, one of whom is also a doctor and the other a statistician. In his spare time, he is a keen student of military history who enjoys visiting ancient battlefields and is also an accomplished painter. He enjoys rugby and cricket.