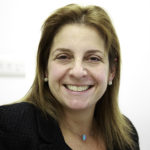 Her talk was entitled “Endocrine Medicine – Just two skills but it takes guts to develop them”.

Prof Druce undertook her undergraduate training at Christ’s College, Cambridge University and completed her clinical training at University College and Middlesex School of Medicine in 1994. She completed her higher medical training in Diabetes, Endocrinology and General Internal Medicine at the Hammersmith Hospital and Barts Hospital. She was awarded a Wellcome Trust clinical research training fellowship and obtained a PhD in physiology in Professor Steve Bloom’s laboratory in Imperial College, focusing on gut hormones and their role in the peripheral and central control of energy homeostasis.

Subsequently Prof Druce was awarded the Chadburn Lectureship at Barts and the London School of Medicine, and has remained there since then. She has a keen interest in teaching and completed her Masters in Medical Education (Dundee) in 2016. Her current QMUL roles include Deputy Dean for Education (Postgraduate Taught Programmes) and Head of Governance for the Undergraduate MBBS and Dental programmes at Barts and the London. She is also Associate Dean for Undergraduates at the St Bartholomew’s Hospital site. She holds a number of external roles including Chair of the Society for Endocrinology Public Engagement Committee, Chair of the Education and Training Committee for UKINETs, member of the examination board for Diabetes and Endocrinology in the Royal College of Physicians and Editor in Chief of Endocrinology, Diabetes and Metabolism Case Reports.

In her Lecture Prof Druce first outlined how her career had developed. Her family had nurtured her, and she had followed her brother to Cambridge. She paid tribute during the lecture to the mentors who had guided and supported her at each stage. She also paid tribute to her husband, and regarded her four children as being a key achievement which she had had to integrate into her career progression. She had also managed to integrate a period as Chair of Governors at the Hertsmere Jewish Primary School.

Prof Druce clarified that the reason for the title of her talk was that in endocrinology one did not have the same tools – such as in cardiology and gastroenterology – to intervene actively. Rather, one had to develop the two major skills of thinking and explaining. The gut endocrine system is intrinsically important; thinking about it, and trying to explain the various interactions and their effects not only biochemically but also on clinical and behavioural patterns, has been her continuing research challenge.

To illustrate this Prof Druce described first her work on ghrelin, a gastric hormone that increases appetite and food intake in both physiological and pathological situations, so that an “anti-ghrelin approach” might help to counteract obesity. Possibly ghrelin can be modified to avoid the appetite promoting effect while not interfering with the other properties of the hormone. In addition she also explored the role of a small intestinal hormone with the opposite effect to ghrelin. This hormone, oxyntomodulin which decreases appetite, resulting in weight loss. To explore this further she had made modified analogs which did not bind to the glucagon-like-peptide-1 receptor and others which altered binding, thus delaying clearance. She also identified some analogs with enhanced pharmacological properties.

Next Prof Druce outlined some of her more recent work, which relates to gut neuroendocrine tumours. She has explored the functional role of 5-hydroxyindole acetic acid (5-HIAA) that is produced by some of these tumours. She explored the nature of these tumours during her time in Israel at the Rabin Medical Centre in Petah Tikva, funded by the Daniel Turnberg Fellowship scheme. This scheme was established by Lord and Lady Turnberg in memory of their late son to allow early career researchers to undertake short term visits, and thus build research links and scientific collaboration between the UK and the Middle East.

Finally Prof Druce explored some of her educational initiatives she had undertaken in her role with Barts and the London, and also within the Royal College and the Endocrine Society. She had found that medical students would report patient safety issues which arise during their studies. Her recent work was tackling questions about online e-learning approaches to teaching. She has highlighted that it is essential to ensure that the “user” is properly engaged to take advantage of material offered in this way. In this regard a flipped learning approach has been tested where students are encouraged to view lectures first and then look at case based material. There was improved engagement compared to previous, but assessment scores were not affected.

A vote of thanks was proposed by Dr Simon Cohen, who noted that Prof Druce had been his pre-registration house officer, and that he was delighted to hear her talk and recognise the contribution she has made in every facet of academic medical practice during her subsequent career.