“Autoimmunity Explained – It’s All In The Cards”

Prof David Isenberg trained at St Bartholomew’s Hospital Medical School. He undertook a series of junior doctor posts in North London ranging from psychiatry to metabolic bone disease, belatedly realising that these were excellent preparation for a career in rheumatology! He spent time in the laboratories of Prof Ivan Roitt (Middlesex Hospital) and Robert Schwartz (Tufts/ New England Medical Centre, Boston). He was appointed a rheumatology consultant at UCH /Middlesex in 1984; given a personal chair from UCL in 1991 and became the Arthritis Research UK Professor of Rheumatology at UCL in 1996.

Prof Isenberg’s scientific interests are in the structure, function. origin and pathogenicity of auto-antibodies and in the development of clinical  assessment ‘tools’ for use in clinical trials and long term observational studies of patients with systemic lupus erythematosus, Sjogren’s Syndrome and myositis. Outside interests include the theatre, music, and Tottenham Hotspur (and as a Spurs supporter he knows a great deal about suffering). He has organised many meetings but is particularly proud of a series of bi-annual rheumatology meetings held since 1998 at the Technion Medical School in Haifa and supported by the family of the late Dr Gerald Loewi.They are the largest rheumatology meetings in Israel.

In his Presidential Address Prof Isenberg told the Association about the history of Systemic Lupus Erythematosus, about clinicopathological correlates in this disease, and about emerging translational advances in the field. He illustrated his talk with case studies, some of which posed serious ethical issues. Before his address a Jewish Medical Association UK bursary holder, Juliet Stevens (from Oxford, now a junior doctor) summarised her elective in Israel, explaining how research on cancer has led to new ideas about foetal implantation. 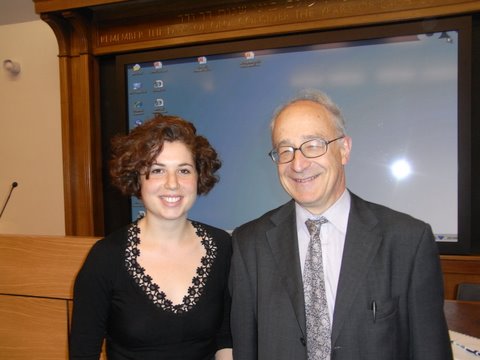